Changes to the West End are destroying San Antonio Ibiza 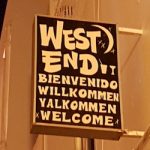 The West End what is the answer?

It’s a bold headline but we do truly believe that the changes to the West End are destroying San Antonio, Ibiza, however, we also believe that by supporting the area and not condemning it, it could benefit the town as a whole.

For those that do not know the West End is a small area of San Antonio filled with bars, takeaways and nightclubs covering around 5 streets which are open daily from 10 am until 5 am.

It is the gathering point mostly but not exclusively for the young to enjoy cheap drinking and lots of laughs but has in recent years also become the focal point for everything that’s wrong with Ibiza. With people taking it to excess, fights, rubbish left lying around, escalating crime and way too much noise.

In response to this, the local council started to crack down on the area by issuing rule after rule in a vain attempt to control the area.  However, after having spent several evenings there over recent weeks what they have actually created is a lawless hotbed of crime and chaos with no noticeable policing of crimes commited or the laws put in place.

We shall start with this year’s changes which were namely the removal of the terraces (where many sit out on an evening) at midnight for those playing music and 2 am for those not.

The idea was to reduce the noise from the area to help those living nearby get a good nights sleep.  But in actuality this has failed and has caused more problems than it has solved.

Up until midnight, the area is filled with people, many sitting out enjoying the warm evenings having a few drinks and a laugh together.  The age range varies from late teens to OAP’s all harmoniously enjoying themselves side by side, people watching and generally having a good time. 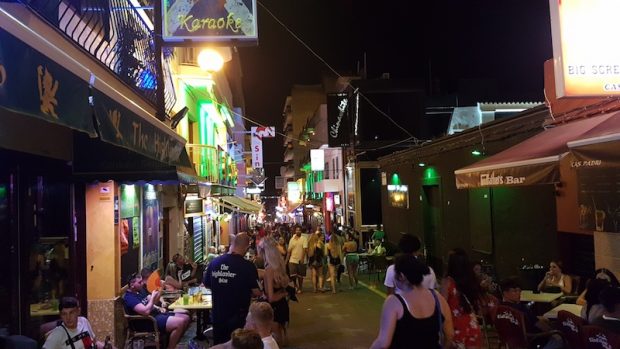 The individual bars are responsible for their own terraces and in the most part no major problems are seen. The litter is cleared away, those that have had one too many have somewhere to sit and take 5 mins,  the young and old sit side by side chatting and sharing their Ibiza experiences and new friendships are forged.

Then the terraces are removed.  First the tension rises from those people who don’t want to be moved on, or inside to the noisier venue.  The older generation soon depart as they don’t want to party inside, the pickpockets, lucky lucky guys, prostitutes now have free access to roam everywhere and people still seem to hang around outside the venues, whether they are standing around in the street on sat down on the floor.

The policing is very sporadic at best, and despite promises of a dedicated team they are rarely present.  When they are we are told (we never saw any apart from 3 to remove a quad bike illegally parked) they go after the PR’s or terrace issues and not the real problems in the area. 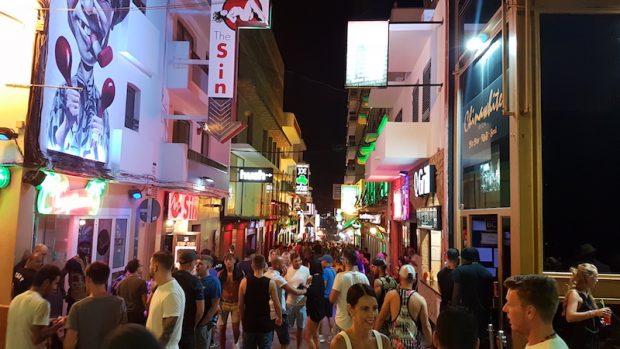 The noise level we believe actually rises as groups start to fragment and wander off with endless calls from other party members trying to keep everyone together.  So instead of reducing the noise it has increased the volume over a wider area.

As the night wears on the groups wander off and are now taking to sitting along Passeig de ses Fonts (by the fountains), along the promenade or out onto the beach.

The rubbish and noise they generate and leave behind is now spread over a much wider area than before. This affects everyone that visits or lives in San Antonio.

Back in the West End as 5 am arrives the last of the bars clear out and the numbers of pickpockets, prostitutes and lucky lucky guys seem to now rise preying on the vulnerable like a pack of vultures picking at the young naive prey.

Some businesses have already closed their doors and others are reporting a 25% – 30% drop in income since the terrace changes came into effect according to this article in the Periodico de Ibiza.

You then have the clubbers returning from the super clubs now mixing with those leaving the West End, all on a high be it natural or artificial and with nowhere to go they just hang out across San Antonio adding to the early morning noise and litter problem. 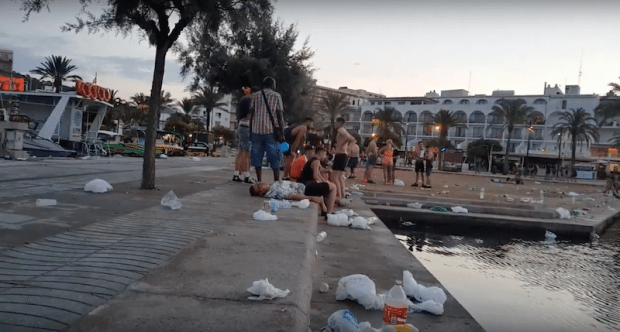 San Antonio in the early morning with clubbers winding down all over the place.

We have spoken to a lot of people about the West End from bar owners to residents and everyone seems to agree that it is now a disaster area not only for San Antonio but for the wider Ibiza with some people even saying the area is now untenable.

The wider issue is of course Ibiza.  For as long as it has super clubs, beach clubs and daytime parties Ibiza will have young people looking for adventure, fun and somewhere to go to have a good time but it also needs to strike a balance so the town attracts families and older couples too.

San Antonio is where most people have their first visit or a cheap stay in Ibiza and rightly or wrongly it needs to embrace and look after the youngsters by giving them a safe, controlled place to enjoy themselves.

So what is the solution to the West End?  Just get rid of it? Yes, you could force every bar out of business with more rules and regulations but you will still have young people wanting somewhere to go.  So you will still have the noise and rubbish.

Hotel room, apartment parties will increase, beach gatherings will increase, affecting everyone and will put more people off returning to the resort again, especially those with families who are forced to experience the chaos the young bring when they are uncontrolled and roaming free.

Then there is the question of what replaces those businesses or do they just stay empty, forgotten and unappealing to all tourists who visit?

Support and help the West End? This is a controversial idea, but why not create a self-contained area which is much safer, much more guided and controlled than it is now, easy to avoid for families or those who are not interested in this sort of thing.

Many of the new laws are just not working, for example like the removal of terraces or the banning of PR’s which as much may be written on paper has, in reality, created hundreds of illegal PR’s across the area and in far greater numbers than ever before who are much harder to spot without the jackets.

Why not reinstate the jackets at a cost to the bars (as before) and use the money raised to add extra safeguards to the area like in the UK where many towns have street pastors / wardens  / dedicated police / medical services helping out those who are in need and keeping an eye on everyone and the area as a whole.

The bar owners made to actually abide by the rules of closing their doors (there are some who do adhere to the letter of the law but the majority do not) this would reduce the noise level especially the bass which travels far and wide. And how about being more proactive when it comes to those who have had a little too much?

Get the local police to concentrate on dealing with the pickpockets, the prostitutes and lucky lucky guys cleaning the area making it more appealing to people including the older generations who love to sit out people watching and maybe reliving their youth somewhat. 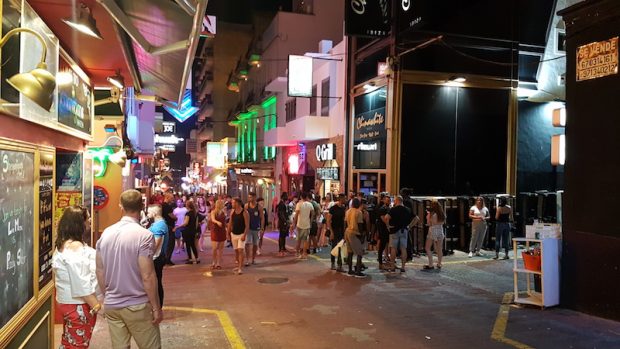 What is the solution to the problems of the West End San Antonio Ibiza?

On a wider issue the women who prey on tourists along the promenade have been there for many years and are a true blight on the town, yet robbing tourists daily seems to just be accepted by the authorities.  It is small things like this that is ruining San Antonio. Why has nothing been done about this? But I digress.

Those with terraces should be responsible for any rubbish within the vicinity of their bar area and for also cleaning outside of their premises after closing, this should reduce the amount of rubbish that the council to deal with each morning.

Staggered closing times over a wider area to try and give those that want to or those returning from the clubs somewhere to go.  It doesn’t have to be a full on party but a relaxed chill out bar or terrace with background music, sensibly priced food and drink but removing them from wandering the streets.

This would cater for everyone and once the West End is all closed up the street pastors / wardens / police could then help and aid people here guiding them to their hotels giving advice and ultimately reducing the issues seen today. 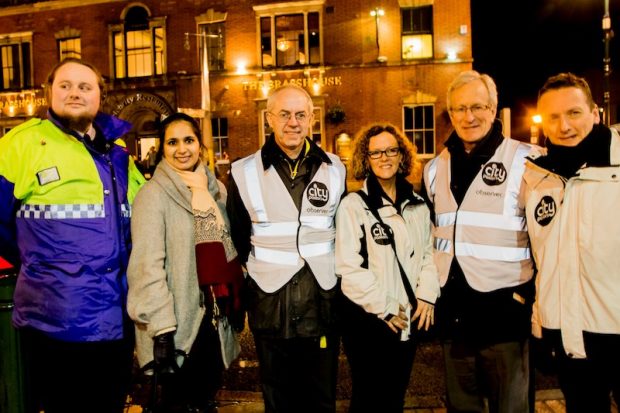 I would also like to see the police and council working much closer with the West End bars to solve these problems and not fighting them as it seems to be now.  The past is the past and not everyone has seen eye to eye but the current situation cannot continue that’s for sure.

I mean over the issue of noise as a collective you could experiment over the course of half a dozen nights to what reduces the noise, terraces until closing, terraces away at midnight, doors closed on every venue but everyone has to work together for the greater good of not only the West End but the town as a whole.

Ultimately if something is not done soon the West End will become a desolate area of the town and tourists will go elsewhere or stay in their hotels and apartments only venturing out to the beaches, for food, alcohol and the clubs.

With nothing to replace those tourists the town will lose. Yes it may end up being cleaner, quieter and easier to manage but businesses will fail across the town and then where will San Antonio be? We suspect crying out for more tourists to return but with nothing to offer them, they will simply go elsewhere.

Creating a vacuum is as disastrous as doing nothing especially where a town is so reliant on tourism as its major income source.

We love San Antonio and Ibiza and our ideas may not be the right ones, so we would love to hear your views and ideas below or via our social media.