The fascinating story of the Ibiza lost resort 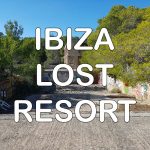 Whilst out exploring recently we stumbled upon a beautiful beach with a rather unique abandoned complex above it.  Here’s the fascinating story of the Ibiza lost resort.

In the far north of the island near Portinax is a beautiful little horseshoe shaped beach called Cala d’en Serra surrounded by high pine covered cliffs with crystal clear waters.  This beach was once named one of Europe’s top beaches by the Guardian newspaper.

It is, of course,  much like many of the smaller beaches across Ibiza but what makes this truly special is the abandoned resort situated just meters above the beach.

It was designed in the 1960s by the now acclaimed Catalan Architect Josep Lluís Sert although due to his political affiliations and his aversion to General Franco’s totalitarian rule he was exiled to the United States.

Sert’s Clerk of Works, Antonio Ferran signed off on the project to get around the fact that Spain’s fascist government had ensured that Sert himself could not be accredited as an architect in the Catalonia & Balearic islands region and therefore work began on the hotel in 1969.

By the early 70s the main structure and layout were completed including the sun terrace which offers outstanding views out across the cove, the pine sided cliffs and out to sea. 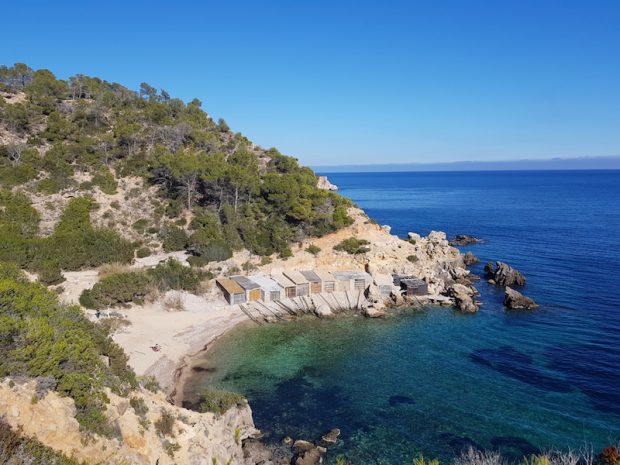 In the mid 70’s the works were halted due to the international oil and economic difficulties in and sadly were never restarted again. When Sert died in 1983 the project was completely abandoned.

Many islanders consider the half constructed hotel a blight on an area of outstanding natural beauty, while others see the project as an important piece of cultural heritage since Sert has now been elevated to one of Catalonia’s most acclaimed architects. 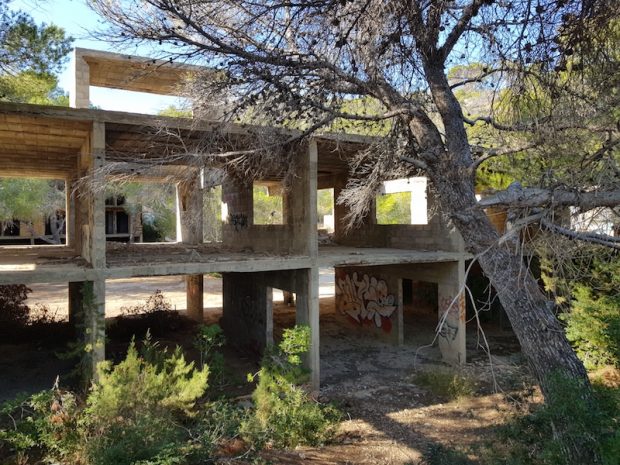 In ruin and never completed nature is taking over again.

In the 2000 plans were drawn up to complete the complex in the style intended by Sert for use as an exclusive tourist attraction and Thalassotherapy Centre (seawater therapy).

These plans were also eventually abandoned mainly due to the world banking crisis and the subsequent downturn in the island tourist economy.

However, in 2012 further plans were submitted to turn what is left into a luxury 100 bed hotel but these were rejected as the area is now protected by the Law of Natural Spaces and fall within an area of Natural Area of Special Interest. 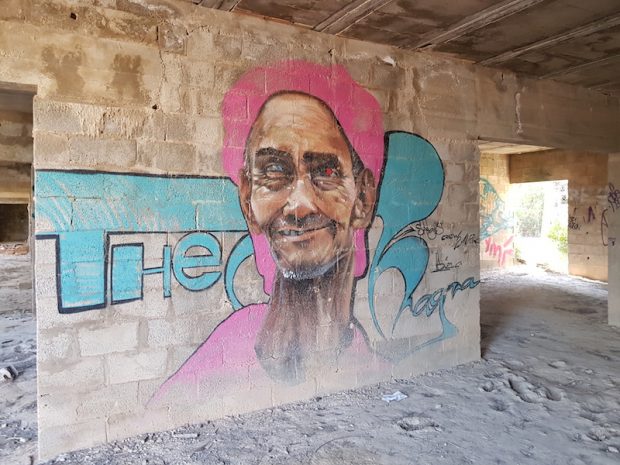 In addition, the location is also partially covered by the State Coastal Law and by the Territorial Insular Plan of the island of Ibiza so we doubt anyone will ever see the glory that Sert originally designed.

What is left today is an imposing structure although mother nature is creeping back in slowly but surely. It has been heavily vandalised over the years but does have some rather good graffiti visible from outside of what is left of the fence protecting the site. 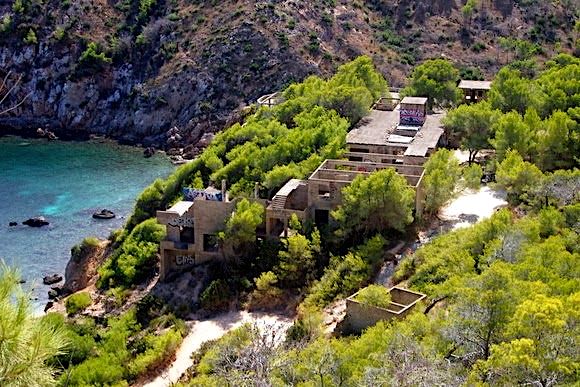 We would advise extreme caution if visiting as some areas do look very unsafe and we did not venture too far in, just enough to see what could have been and to imagine what Sert’s vision was for this resort.

It is also worthy of note that the road down to the hotel is very steep and rough.  It is best to park at the top and walk down the hill if you wish to get a closer look.

Lastly do check out the small beach it is wonderful and I can see this becoming our little escape-to spot in the summer where I shall raise a glass to Architect Josep Lluís Sert and the fascinating story of the Ibiza lost resort.