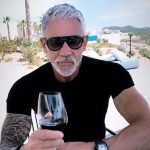 As the Ibiza party season gets into full swing we took time out for a few hours to redo one of our famous Ibiza interviews with O Beach Owner Wayne Lineker.

We always take time out to see Wayne a couple of times a year to discuss life, Ibiza and to get his views and opinions on the future of the island.

He may know how to party but he has also has a wise and shrewd business head especially when it comes to Ibiza.

Alongside his business partners, Wayne has built up an ever growing portfolio in Ibiza of various interests and even more so since we last interviewed him a couple of years ago so its only natural to catch up with one of the most influential businessmen in Ibiza once again.

A huge welcome back to the blog Wayne.  You left Ibiza on the 7th of October last year after Ocean Beach’s 6th season and have just started the 7th season of what is now O Beach Ibiza, how excited are you for the season ahead?

Yes, I did leave on that day and it was a very sad day they always are, however, I’ve had a wonderful winter, a very healthy winter and spent some great times with my family in the Maldives and other wonderful destinations.

But now I am ready more than ever for another season on the magic white isle. This will actually be my first ever season at O Beach as a single man, which obviously adds even more excitement to the mix 😉.

O Beach Ibiza has a new name but the plan is to offer the same incredible experience to those visiting.  What changes have been made over the winter to keep O Beach Ibiza at the top of its game?

We haven’t made many structural changes this year but as always the venue has been completely revamped and looked absolutely amazing for the Opening Party.

We have lots of new productions this year alongside some amazing shows with some exciting new events for everyone to come and enjoy.

What was Pearl Restaurant next door has now become the O Beach Lounge and is where you can find a more laid back atmosphere during the day but after dark this is where the O Beach After Parties will take place.

It is also the perfect spot to watch the sunset and grab a cocktail or two. 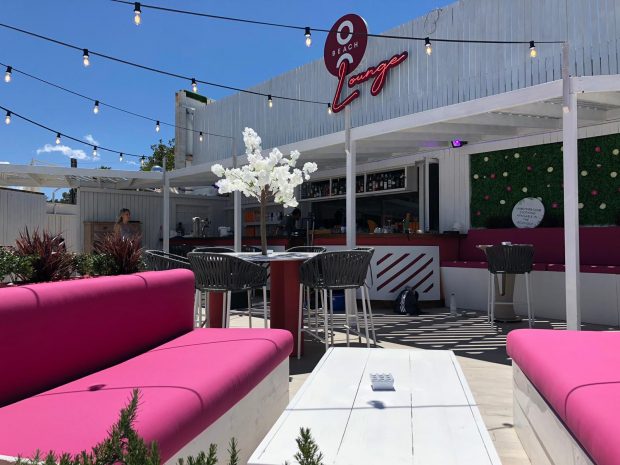 The traditional Ibiza night time party has changed over recent years to include many more day time options.  What makes the day time party so successful in Ibiza?

Yes the whole drinking culture has changed over the past 10 years where people used to meet earlier in the bars and then go on to the clubs.  But now it seems they’re having a good time and a few drinks during the day then having a siesta and then going to the clubs later on.

Yes of course some of the bars have suffered a little over the past few years but it’s all good you learn to adapt .. day time partying is just something that’s evolved and is only getting stronger.

I mean who wouldn’t want to party all day in the sunshine with 1000 girls in bikinis in the most amazing venue that is O Beach Ibiza. 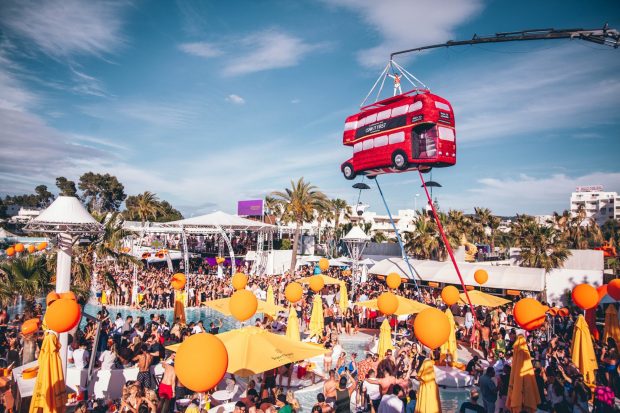 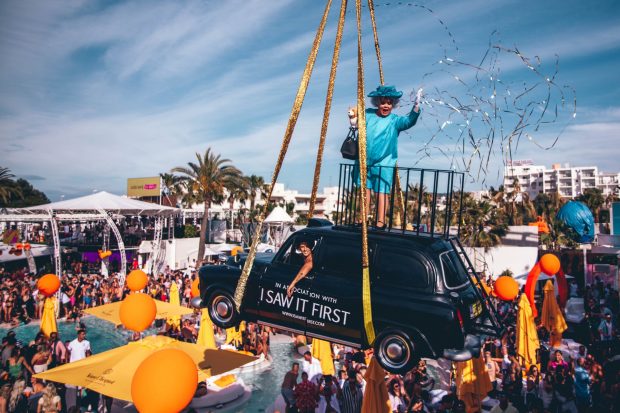 Or maybe the Queen atop a black cab, only at O Beach Ibiza

Last summer saw some incredible scenes at Linekers whilst England were playing in the World Cup.  With no huge tournaments on this summer are you going to miss the passion the fans brought to the bar this year?

Yes we always love the European Championships and the World Cup it adds something special to Linekers but sometimes the hype of the World Cup etc can get in the way of a normal Linekers routine so I’m expecting an amazing summer once again with a lot of crazy stuff happening in Linekers.

We have some unbelievably good staff that cannot wait to join in the party Linekers bar style. As you’re probably aware Linekers is all about having fun, dancing on the tables dancing on the bar top and just getting involved in the atmosphere ..bring it on.

Yourself and your business partner Tony Truman are building up quite a large portfolio of businesses across Ibiza and wider afield including Faith your one-stop Ibiza concierge service.

The Wi-ki-Woo which has been voted the most instagrammable hotel in the world.

The Skinny Kitchen which has now opened in two London locations which was also noted as one of the top instagrammable places in the world as well as appearing on numerous TV shows.

Itaca Ibiza on the promenade in San Antonio which is one of those loved by all venues young or old, be it relaxing and watching the sunset or dancing away until the early hours.

But it doesn’t stop there the winter seems to have been a busy time for you both.

You are taking over Surf Lounge next door to O Beach and over the course of the winter 19/20 it will have the Wayne and Tony flair added to it. What can we expect in the future for Surf Lounge?

Yes we’re spreading our wings. You’ve actually missed a few out there but never mind 😊 Linekers, STK Ibiza, Kiss My Fairy and CEBO all part of the group now but yes we have big plans for the Surf Lounge.

All which will be revealed soon but we are very excited about this project and it’s something that Tony will love to get his teeth into with his flamboyant designs. I have a feeling we may see a little bit of pink this time 😉 we have a couple more things in the pipeline too but it’s too early to disclose these at the moment.

We also spotted the little restaurant behind O Beach currently CEBO has also come under your management and its no doubt too early to ask about its future but how important is it to you to keep investing in Ibiza and upgrading venues and establishments?

Yes CEBO we have acquired this now but it’s a little too late to change it too much before this summer so our plans are for next year, however, we will be put in our normal effort in to make this a great place to visit with great food it’s a typical Spanish Tapas bar.

A lot of things are coming our way at the moment but we are very selective about what we take on but I can confirm that the Ibiza future is very exciting for us.

Every year we all get the haters and the downers that Ibiza isn’t the same as it once was, that the VIP establishments have ruined it, its become far too expensive for the masses and the like but visitor numbers keep growing.  Do you think the Ibiza vibe has changed from say 20 years ago and is it still going strong?

Popular culture is ever changing, the current trend is for many to be on Instagram and in instagrammable places. VIP areas a part of life now and not just Ibiza.

You see it in the London clubs, the Manchester clubs, pretty much every club everywhere but it doesn’t change the ethos or the vibe of Ibiza.

There is still a lot of love, happiness, good times. Whether you are behind a VIP rope or not, there would be no VIP without the dancefloor in every bar or club.

Every single ticket holder matters and that creates the atmosphere. If there were no one on the dance floor filling the clubs then the VIP wouldn’t be full either.

You still get that buzzing, that feeling. When you land in Ibiza you’re not thinking of VIP ropes and VIP places you’re just thinking about being in Ibiza and the love and the atmosphere.

The great music, the experiences and looking forward to the great times you are going to have on the island.

What advice do you have for those first timers to Ibiza who are looking to come and explore the bars clubs and the islands wonders?

My advice would come to Ibiza with an open mind. From the minute you touchdown you can feel the Ibiza vibe.

It has a certain energy that’s hard to experience anywhere else in the world. It’s truly a magical place. It has something for everyone, it has a diverse culture and you will discover all of it if you take the time to look around. 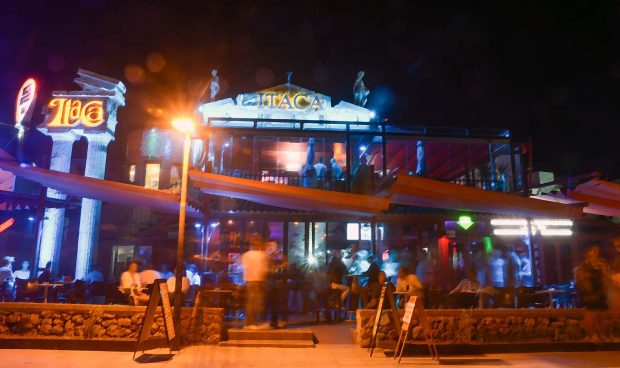 Itaca Ibiza one of Wayne’s recent acquisitions in Ibiza

On a rare day off from work and business where do you like to go to get away from it all in Ibiza?

I very rarely have days off but if I do I just like to chill at the resort where I live Seven Pines or go to Ibiza town and do some shopping and have lunch or dinner. The island has so many wonderful places to visit and occasionally it is nice to get away from all of the craziness.

Last year you launched Faith Ibiza the one stop concierge service for the white isle creating the perfect holidays for people, how much satisfaction is there in creating peoples perfect Ibiza experience?

Faith was created to allow people to do exactly what we decided to call it Book with “faith”!

There are so many stories of clients booking with bogus companies and being let down I wanted to restore credibility to the sector. What we offer we deliver, if we can’t we say so!

We don’t let people down. There’s no better satisfaction than the gift of giving. Allowing and making people smile gives enormous satisfaction and I’m eternally grateful that I am able to be in a position to do that these days, whether it through business or charitable work where possible. 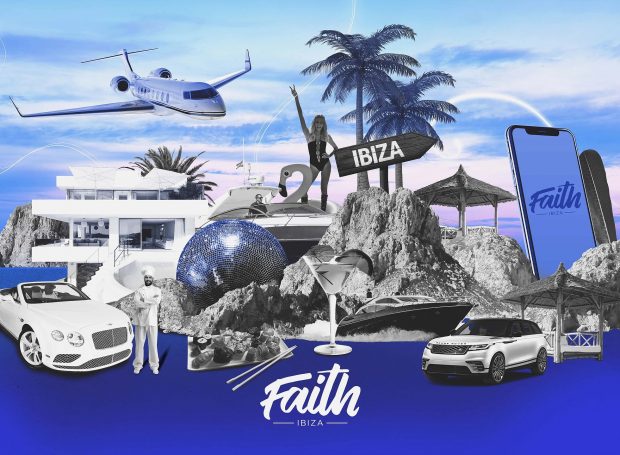 Faith Ibiza the one stop concierge service for Ibiza

Lastly, O Beach is spreading its wings this year with the opening of O Beach Dubai how proud are you from taking what was a dusty car park and turning it into one of the world’s most recognised venues and experiences?

Building a brand doesn’t happen overnight.  It takes a lot of dedication and belief in what you are trying to achieve. Brands are the product of dreams and allowing people to realise their dreams.

In the dusty car park, my partners and I saw a vision to make this dream come true. Without the collective, it would never have happened. To be able to expand into Dubai is an extension of our dream and we are extremely proud of what we have created and hope to achieve in the future with the brand. 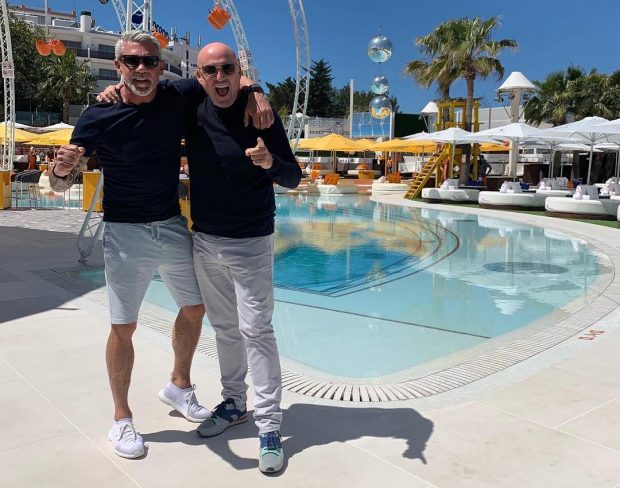 A huge thank you to Wayne for taking the time to sit with us and chat to us about Ibiza and his plans and thoughts on the future which if his business partner Tony has any involvement in will include a lot of pink we suspect.