Improvements to Cleaning and Policing in San Antonio Ibiza 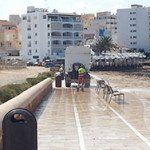 Two of the most contentious issues in San Antonio in the last few years have been the cleaning and policing of the resort.

With a new Council having been elected in recent weeks, it seems that changes are already being made to improve the situation in both these areas.

From the 1st of July cleaning will take place during the evening as well as in the morning which is currently when the cleaning is done.

Under the changes new staff will be hired and San Antonio Council will also take on the responsibility for cleaning the Port area to keep a uniform cleaning programme across all areas of the town.

In addition to this a new cleaning specification is being drawn up by the Department of the Environment of San Antonio ready to be put out to tender in the next few weeks.

The local Police are being reorganised to allow more uniformed officers on the streets of San Antonio in a bid that a more noticeable police presence should deter people from committing crimes.

The Police will also be responsible for enforcing the local ordnances / bylaws and to aid in traffic control.

However, these are not new additional officers, and there is some concern locally that taking them off other duties to provide this extra visible presence may do very little to solve the current problems in San Antonio.

On a separate note there will also be German, French and Italian officers on the island this summer working alongside the Guardia Civil who will have a slightly increased force island wide this year compared to previous years.

But there is still no firm news on any UK police being based in Ibiza with the island still waiting for confirmation from the British Government.

These are definitely positive, if not small, steps forward for the town and even with  the concerns that have been raised it does show that changes are being made to improve San Antonio for everyone.