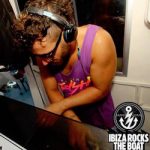 Often described as one of the UK’s most promising DJ’s Patrick Nazemi has been behind the decks for over 8 years and comes from humble beginnings playing mates parties and local club nights in Bristol.  He is now a rising star and Zane Lowe also commented “he is fast becoming a liability to have to follow on the decks”.

As we start the 2016 summer season we sat down with DJ Patrick Nazemi for an insight into being a DJ in Ibiza, the incredible season ahead playing under the Balearic sunshine and his thoughts on the island’s future.

Just how eclectic and varied the line-up is. We’ve managed to secure some of the biggest acts in the world whilst remaining true to our ethos of keeping it alternative and different to what everyone else is doing on the island.

This year’s line-up is by the strongest I have ever seen. See the full lineup here.

The biggest news out of Ibiza Rocks Hotel in 2016 is that Craig David bringing his TS5 party to the venue on Sundays and that you will be joining him on the line up how excited are you for this event?

I am literally beyond excited. Craig has always been a firm favourite of mine (I still know every word to Born To Do It), and I was always pretty annoyed when his career was damaged by a person that wasn’t and still isn’t funny. He is incredibly welcomed back to the U.K. music scene and I can’t wait to party with him every Sunday around our pool.

You have played a lot of venues in Ibiza but when did you first visit the island and what was your first gig there?

I first visited back in 2010. I came out with some mates from the Irish Rugby Team and as we all know the Irish love a drink or 20, so we had a VERY boozy week of it. We luckily didn’t spend the whole week getting wrecked and actually hit up Swedish House Mafia Opening Party at Pacha and it really opened my eyes to house music. This was just before they released “One” so they were still playing from their roots and it was incredible to see.

My first ever gig on the island was actually at Ibiza Rocks through the Indie night Propaganda. We opened for The Kooks at the hotel then played the Afterparty at Es Paradis. 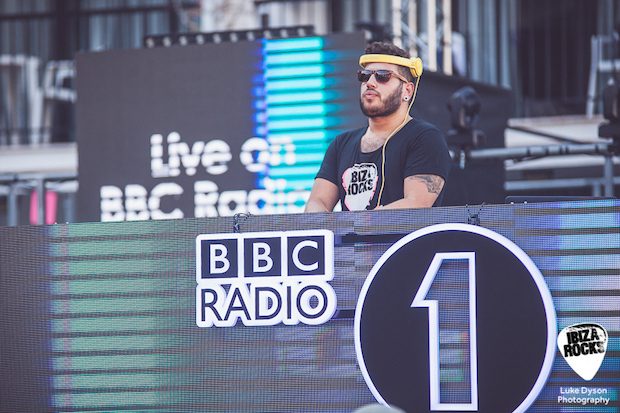 What is it about Ibiza that keeps you coming back year after year to play?

The energy of the island. It is the most magnetic energy I’ve ever felt, and it really reflects in the crowd and their energy when I’m playing to them. This means as a DJ I can take more chances, throw curveballs and take myself out of my comfort zone of playing which is always super rewarding.

You get to play out in the Mediterranean Sea on the Ibiza Rocks boat party which have become a must do of any parties goers holiday, what is it like to play in such a unique venue?

It’s rowdy! The crowd are right in your face, slapping you on the back for that last mix, cheering and spraying champagne everywhere. It wouldn’t be Ibiza Rocks without a boat party. 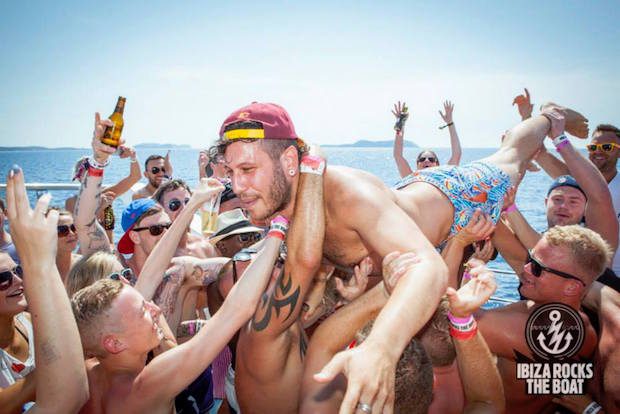 Having seen you play several times at Ibiza Rocks Hotel, Ibiza Rocks bar and in your home town of Bristol we wouldn’t say you were genre specific, do you feel as a DJ playing different venues and crowds you have to adapt your sets to suit?

Absolutely. I purposefully take gigs that are slightly out of the genre that I’m confident in playing so that I can continue to improve my musical vocabulary. The more vocabulary I learn, the better I’ll speak! (ironic that this might not make grammatical sense, ha!)

How did you land the job of resident DJ at Ibiza Rocks?

I gave the owner Andy Mckay a topless hand shandy on the bed that Freddie Mercury partied on in Pikes – and the rest is history.

What advice do you have for other up and coming Dj’s who believe Ibiza is the answer and that playing on the island will make them a superstar Dj?

For the record, I am definitely not a superstar DJ haha. But if any DJs are looking for advice on what to do to keep moving forward, I’d say:

Do things in your own way so you stand out from all other DJs on the circuit, remain respectful to everyone, be genuine at all times and SMILE. Talent, consistency and dedication will always pay off.

If you’ve not seen me play live before, this is kinda what I do.

Taken from my guest mix on Rinse FM last Friday.

There have been lots of changes to Ibiza in recent years and some say it is losing its magic, do you feel this is true?

No way – the magic and energy is probably the most alive I’ve ever felt in the 6+ years of coming here! Some of this year’s parties across all of the venues are insanely exciting!

People must remember that The White Isle has survived multiple generations, trends and genres over the years. From the early rave days in the 90’s then the transition into the 00’s, and now the introduction of this “VIP” style of clubbing. Ibiza will continue to change to the shape of it’s crowd, and will remain as the European capital of partying and love.

Lastly and on those rare days off where are your favourite places to visit on the island to recharge and relax?

This summer all of my chill time will be spent at my yard! I’ve just sorted the sickest villa and will be living with my BFFs.

Our pool is a complete vibe and makes the potential for afterparties disgustingly excellent.

You can listen to Patrick Nazemi full guest mix from Rinse FM below:

A huge thank you to Patrick for joining us on the blog.  You can catch him Wednesday, Friday and Sundays at Ibiza Rocks Hotel in San Antonio and Tuesdays on the Applebum lineup at Sankeys in Playa den Bossa in 2016.