A hotly contested issue by locals, workers and visitors alike here are my thoughts on the subject of Radio 1 sunset strip event in San Antonio.

Radio 1 celebrated 20 years of broadcasting from the white isle this year with many different events across the island. Most are being held in purpose built venues suitable for large crowds with all the facilities in place such as sufficient security, toilets, medical provisions,etc.

The free advertising this generates for the island is difficult to put into a monetary value but it is easy to say that Ibiza could not afford it if it had to pay to reach an audience of this size. Added in the fact that it is on BBC Radio 1 where you simply cannot buy advertising it is impossible to quantify.

However, with the island apparently trying to change its image, is advertising to a younger audience (15 – 29 Radio 1 remit) really what the island needs? Do they need more of this age group visiting?

If you speak to locals and even spend time within the West End it is this age group who seem to have little or no self control and they seem to be the ones that cause the majority of the problems, so does Ibiza want a more mature (not old) tourist who understands when its time to stop drinking, who know what bins are and who know what toilets are and use them accordingly and has that little extra money to spend.

I digress, one large change this year to the Radio 1 lineup was a CLOSED event on the Sunset Strip in San Antonio based around Cafe Mambo. Tickets were originally by ballot which we applied for and duly “won” a pair. We attended the ticket exchange with our proof of age queued for an hour and got our wristbands. (as much as we couldn’t go for the whole evening I wanted to see for myself what this event was about) and to enjoy Radio 1 in Ibiza.

It also gave me the opportunity to look at the layout prior to the event taking place(from a purely technical point of view) and I was shocked at the disregard for the Ibizan coastline with the stage and tv screen towers being erected directly on the rocks with no protection or matting being put on the rocks for the build area. Most of my concerns in regards to this are deeply technical but to say in my qualified opinion (5 years experience of stage building & event management) it was inconsiderate, and likely to be destructive to the environment. 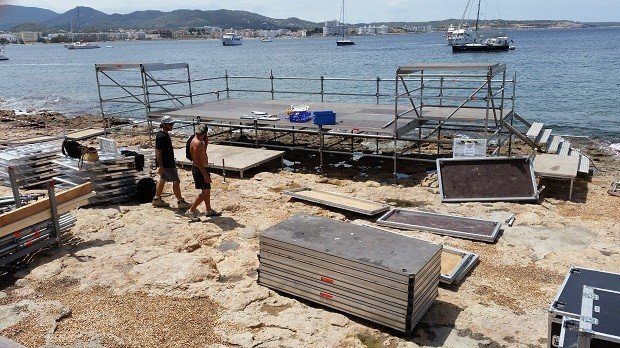 The placement of the stage was opposite Mambo’s steps meaning that personally, as an event organiser it would give me concerns about crowd movement and flow, not only on the steps but also across the rocks especially as they are so uneven and the event ran after dark.

I was pleased to see that the event team had brought in extra toilet facilities, additional medical cover with one medical center within the event and one just outside, additional security and even had the Guardia Civil posted outside in two separate places (who we saw being used at one point).

On the evening of the event we went down, gave our children ice-creams at a cafe beside the entrance (they are 11 and 17) so we could have a quick look. Upon entry ALL liquids be they water or alcohol were removed from everyone. The price for a bottle of water inside worked out at 6 euros which i believe is dangerously over priced especially as we all know that the area before sunset is extremely hot and doubly so for those visiting from the UK.

Since posting this article we have been told free water was made available but have only had one person confirm this to us thus far. 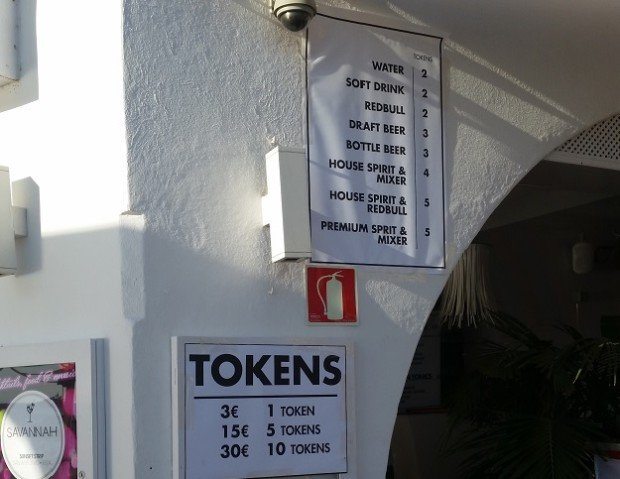 Water at 6 euros in such a hot environment is over priced, you cannot price peoples welfare like this.

With in a few meters inside the event we saw children, and I don’t mean one or two we saw at least 15 in an event which was for an over 18 audience. I brought this to the attention of a prominent local and got laughed at saying he had brought 10 with him. It seems one rule for one and another rule for others and these are the people trying to improve the town.

We walked along shocked at the prices for drinks which were on a par with the super clubs of the island, however, this event was not a super club style event it was a celebration of 20 years of Radio 1 and not an event to rip off the unknowing public.

We had a good look round and apart from my technical concerns as mentioned above, I am genuinely amazed as I write this that I have not heard of any serious injuries happening on the site. 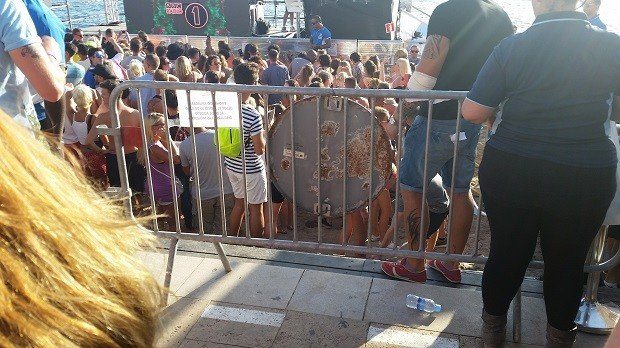 The increased music volume compared to normal from that area of the town was evident and it was meant to be the same as any other night. Again I had no way of monitoring this but I very much doubt the event, Radio 1 or the council had a professional monitoring crew on site to ensure the limits were not broken.

Upon leaving the event wristbands were cut off and shortly afterward we were approached by official member of “Sunset Strip Staff” T-shirt who was selling the wristbands for ten euros each. He had approximately 25 wristbands and confirmed that the bands were free up until 6pm but after that time they had been told to charge for them. This further sullied the event in our opinion as a BBC Licence fee payer and goes against all publicity from the BBC itself about the event being free.

This morning after the event I walked down to see what the aftermath was. All the sound / lighting / cabling had been removed and to be fair the rocks were fairly clean, however, the cafes along the promenade were washing their frontages and decks off and pushing the cigarette butts and plastic straws directly onto the rocks beside the sea and we also spotting several used NOS canisters.

The pollution from these is more evidence of the disregard of the coast of Ibiza and yes it may be a small point but it will have an environmental impact if not then picked up by the cafes after washing the debris on to the rocks. 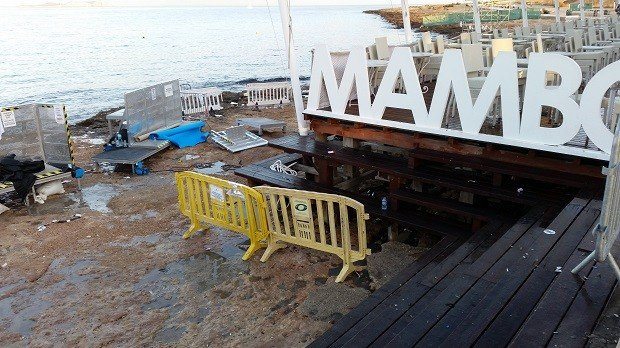 As much as I agree it is a great event for the town I find the actual implementation of the event to be poor from a technical, safety and environmental side. This was BBC Radio 1 who should be held to the highest possible standards as they are at any other event they do. Just because they are in Ibiza shouldn’t mean they can run rough shot over its coastline and residents.

I did take up my concerns with a local San Antonio politician earlier in the week who was very accommodating and invited us in to the Council Offices. Despite our language barrier, he acknowledged my concerns and we had an in depth discussion about the issues of this event on the town.

I have also contacted Radio 1 directly with my issues and I will be contacting others to ensure that if an event like this is planned again for San Antonio that the standards are raised in all areas and that lessons are learned.

Yes I am a whinging foreigner but in my deep passion for this town and area it is time for San Antonio to step up take responsibility… To improve and not to let money allow anyone to do what they like before a serious incident happens which forces changes. There was a better way to run this event from day one but it seems the demands from Radio 1 and Cafe Mambo drove it, not safety and environmental concerns.

And to Radio 1 you truly have lost the spirit of Ibiza in the 20 years you have been coming and is the price of a good radio and red button show more important than the island of Ibiza itself?