An interview with Jo Crumlin from The Highlander San Antonio Ibiza

When many people think of San Antonio, the first thing that comes to mind is the West End, a collection of bars, pubs and nightclubs which focuses  people’s perception of the whole of the town, if not Ibiza itself.

So we took time to sit down with Jo from the Highlander, one of the most famous pubs in the West End, to find out the truth about this part of town and how the Scottish bar has stood the test of time as well as to chat about her exciting new app Menu del Dia (Menu of the Day).

What first brought you to Ibiza and what made you stay?

I grew up in a large housing estate in North Belfast which I loved but after losing a close friend before the age of 20 I had the urge to live life to the full as not everybody gets that chance.  (RIP Libby xx)

So after a brief spell in England I booked the cheapest flight abroad which just happened to be Manchester to Ibiza on 10th May 1997.

How did the idea of the Highlander Bar within the West End come about and how did it develop into what we know and love today?

The Highlander has been owned by the same Ibicencan family for decades. I have run the pub for the past 15 years with Sebastian Capo (Junior).  The pub was originally his grandparent’s house and his father Sebastian Senior (RIP) made the house into a restaurant. 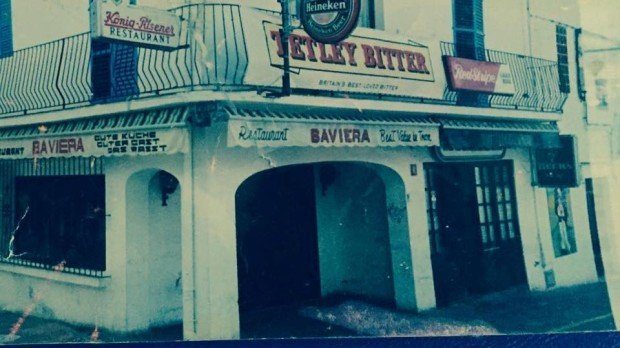 The original restaurant and the start of The Highlander

In the early 90´s the Highlander Ibiza was born in a small part of his father’s restaurant.

Around the end of the 90´s Sebastian Senior wanted to retire and passed the pub onto Sebastian Capo who knocked it down.  After a year of blood, sweat and tears he re-opened the pub as you know it today, fully renovated and with a second floor and huge outdoor terrace.

This is where my personal Highlander journey began back in August 2001.

The Highlander is seen as more than just a bar. It’s a community.  In your opinion what makes the Highlander different from other bars within the West End?

The PEOPLE make the highlander, the staff and the customers.  Over the past 20 odd years a lot of people have worked hard to make the Highlander what it is today. Even before mine and Sebastian’s time here it was filled with Scottish staff.

It’s a Scottish pub where everyone is made to feel welcome.  Some of our team have been with us for more than 10 years now and it really is one big happy family.  It’s like having 25 kids, some days some are behaving and some not lol.

The customers are important to us and we make sure we have time for them; they work hard for a year to come to Ibiza so it’s up to us to make their holiday special.

Who is the most famous customer you have served in the Highlander?

I would like to say Stevie Gerrard (a girl can dream) but we actually get a lot of Scottish footballers and the odd big name DJ passes by for a shot. Sam Divine (Defected) being our favourite. 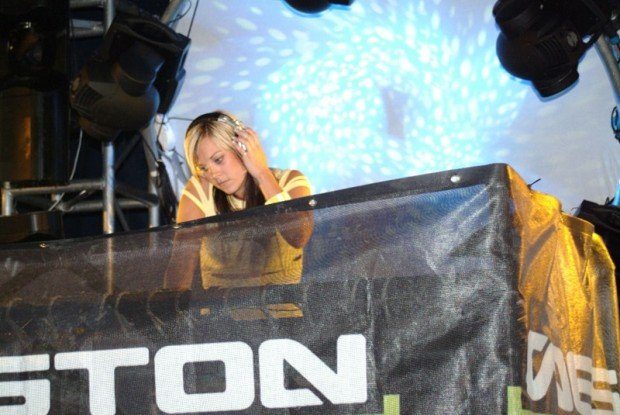 Highlanders favourite DJ, Sam Divine, who oddly we employed over 10 years ago at Weston Wheels

Even before Facebook existed we always had contact with our visitors.  As we say in the highlander ¨Come in as customers but leave as friends¨.

How do you feel the West End area has changed over recent years?

To be honest I don’t see much that goes on outside of the Highlander. I am kept busy with my own stuff and tend not to get around the West End much now.

I can say that every year the Highlander improves and gets busier. I believe you get out what you put in, work hard spend money and improve or stay in the past and get left behind.

Are there any improvements you would like to see the newly elected Council put in place for the West End and for San Antonio as a whole?

Getting rid of the illegal workers would solve most of the town’s problems. It’s a beautiful town and my home for nearly 20 years now so to be honest there’s not much I would change I LOVE SAN ANTONIO. 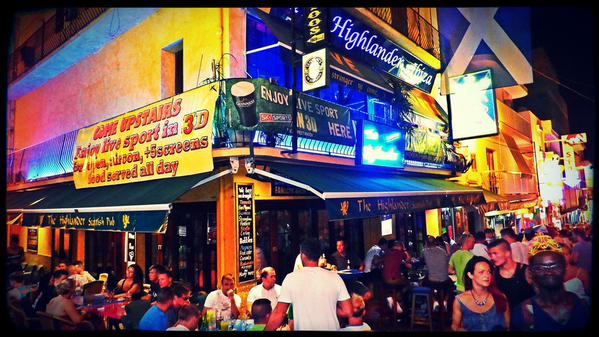 The iconic Highlander in the West End of San Antonio

The West End plays a vital role in Ibiza.  It draws the young to the island for their first time and can be a place to really party hard and enjoy life.  It is often seen as a right of passage for many on their first holiday away with mates.  How important do you think the role that the West End has to play in shaping Ibiza’s future?

Ibiza is the best island in the world because it has something for everybody and the West End plays a part in this. It has also provided me and hundreds of others an income for more the 30 years.  It also helps make San Antonio the beautiful town it is with the money generated in the West End by means of tax and what we pay into the town hall.

I would love to know how much the town hall earns from West End business and how much it helps this town.

I think I have only needed to call the Police twice in 15 years. I am quite strict with who I let into my pub and the amount of alcohol I let them drink so I personally don’t see the need for more Police.  As I have said before, if they removed the illegal workers most of San Antonio’s problems would go with them, but this is an island wide problem and not just a West End problem.

Where would you like to see the West End in 5 years time?

With a few more restaurants would be nice.

A few people need to retire, like what we did at the Highlander it’s time for the next generation in some bars. It’s time for fresh ideas and to spend some money instead of just trying to take it.

There’s bars in the West End being run by people who should be sitting at home with a pipe and slippers and the  West End can’t move on until they do. 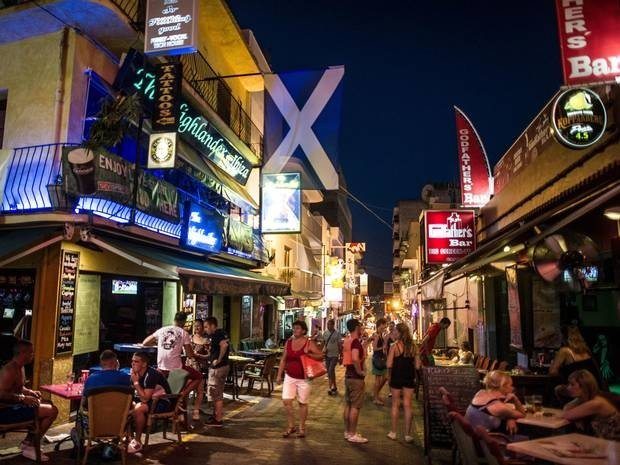 The Highlander in the West End San Antonio Ibiza

With the 2015 well underway do you feel it’s quieter than previous years’ as others are saying and if so, what do you think is the cause?

We started the season with a great May which was busier than in previous years.  I haven’t had the chance to check June’s accounts yet as its just over but it seemed like a good month and that is down to hard work and always thinking ahead.

We work hard during the winter months planning and organising our summer season. The pub might be shut for 6 months but there’s still work to be done.

Now we couldn’t let an interview opportunity with you go by without mentioning your latest success the Menu Del Dia (Menu of the Day) app.  For those who don’t know about the app can you can you tell us a little bit about it and how you came up with the idea?

I spent a lot of time, like many people, driving around town looking for the best Menu del Dia before deciding where to have lunch, so that is how the idea came about.

I had the idea for the app but the quote I got from a developer was a bit steep so I waited until winter and had a go at building it myself.

I started to put something together and with the encouragement of some good friends I stuck with it and ended up with a working app. www.menudeldiaibiza.com I was so happy that it got accepted first time by Apple and Google Play.

You can read our thoughts on the app here

The app isn’t just located within San Antonio but across the whole island.  How many businesses are currently listed on the app, and if a local businesses wishes to become listed how do they get involved?

I think we have around 60 menus now that are updated daily, with the help of my friend  Sarah doing the updates and Alfredo who  is slowly getting round the island and adding new menus daily.

Rome wasn’t built in a day and as we are both busy people who are doing the app in what little spare time we have. I am happy with the progress so far and we will have more time to improve it during the winter months.

To get listed businesses just need to call Alfredo on 616656438.  The stats are great with over 16,000 hits now and growing every day. It only costs 5 euros per week to list your menu and all you have to do is whatsapp it to us by photo or text and we do the rest. 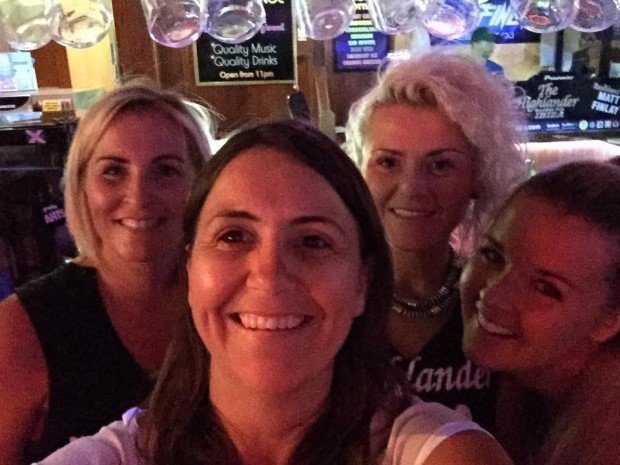 The West End is only a small part of San Antonio and of course of Ibiza itself so where do you like to go to escape on a rare day off?

Luckily for me, and because of the success of the West End I bought a nice speed boat with friends and we like  to head out on that to escape.  I also get the winter months to enjoy the island.

What are your top tips for those coming to Ibiza for the first time?

Moderation, pace yourself and enjoy your time on our lovely island.

A huge thank you to Jo for taking the time (at 4am no less) to talk to us, a great insight into one of the most well known pubs in the West End.

You can find the Highlander online here www.highlanderibiza.com and of course on Twitter and Facebook but next time you’re in San Antonio pop into the Highlander as they say “come in as a customer leave as a friend”.