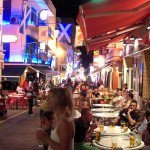 The West End is situated in San Antonio and is made up of numerous bars and clubs which cover a few streets just off the main waterfront of the town.

Some people say it is notorious, others say it’s the beating heart of San Antonio with its cheap drinking, good pub grub, themed bars, night club style venues and even a strip club or two. The West End offers everything you would expect from an area designed for young adults wanting to enjoy life to the max when on holiday, at a much more affordable price than the Super Clubs.

On every visit to Ibiza previously we have always avoided this area and headed the warnings, as being of a certain age with children it didn’t appeal to us.

However how wrong we were, and,  for the past two weeks, we have visited the area several times during the day, night time and of course during the early hours of the morning at  the busiest time of year to learn, understand and to be able to write an informed blog about the area.

On a personal note, I have to say a huge thank you to Jo at the Highlander for the education and to Amanda who served us so professionally night after night whilst we were there.  As they say at the Highlander “Come in as Customers, Leave as Friends! ” and that is most definitely true and exactly how we felt as we left. 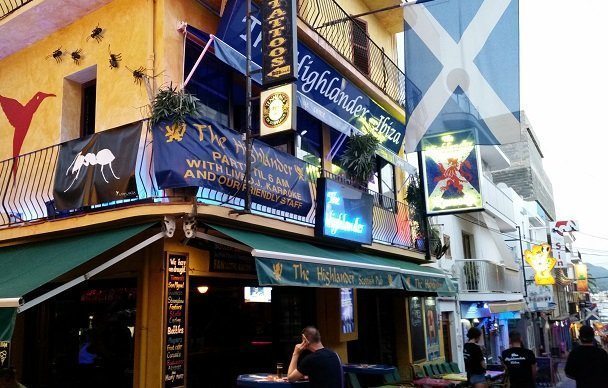 The Highlander where we were made to feel so welcome by all.

The West End’s reputation, which seems to be known across the world, is somewhat unfounded I feel. Yes it has it flaws of course,  but it also has its own unique character and charm.

It’s self contained in a relatively small area.  Most of the bars are well maintained although some could do with a bit of modernisation but the area definitely has its place within Ibiza.

During the day and early evening it’s a great place to enjoy British food, good pub grub, snacks or for a quick pit stop in between activities and is perfect for everyone, although you may find the odd exuberant stag or hen party starting early.

As evening draws in the character of the place changes to what you would expect on an average Saturday night at bars and clubs in any town around the globe. The only difference here is it is Saturday night every night of the week for 4 months of the year.

We have found sitting outside our favourite bar and people watching here a real pleasure. Even for us middle agers!  We have met people we have seen elsewhere on the island of every age simply enjoying the atmosphere, the sights and the sounds of the West End. We have also made some new friends whilst sitting and chatting and look forward to catching up with them when back in the UK. 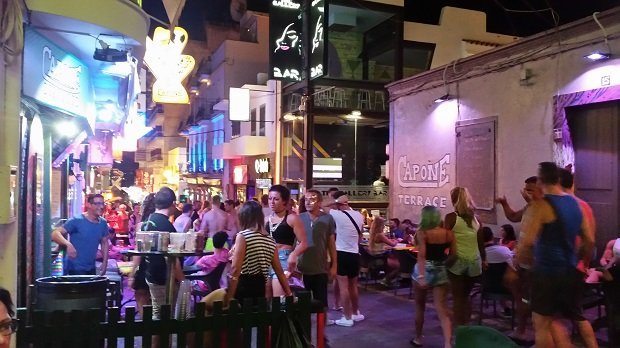 There is a real social element to sitting in the West End that I haven’t witnessed anywhere else and certainly not back in the UK.   Sat in the West End everyone talks to each other, and  checks you’re having a good time,  swapping tips, recommendations and places to visit whilst having a communal drink together.

That said after sunset I wouldn’t advise taking children to or through the area, in the same way I wouldn’t advise taking them to the main bar / club area of my local town at that time of night. It can be very rowdy in places with foul language a plenty (not suitable for young ears)  and with those taking it to excess you are likely to get bumped into as they stumble around.

Some of the PR’s (public relations) for some bars and clubs are a little pushy asking you if you would like to drink at their establishment, blocking your path or even grabbing your arm,  but usually a firm polite no tends to send them on their way.  However, most of the PR’s are polite asking if you would like to have a drink at their establishment and when you decline, politely wish you a good evening and are on hand if you ever need directions or assistance.

If you are sensible, you can enjoy a great night out in the West End. It is NOT a place to fear, it’s a place to embrace wholeheartedly  and enjoy –  just not to excess.

The area, of course does have a few issues at the moment, with the biggest of them being people’s own self control. Some do not seem to know when enough is enough and no doubt are more relaxed as they are on holiday and out for a great time, however, this is a worrying trend across the whole world and is an issue which is much bigger than just Ibiza. 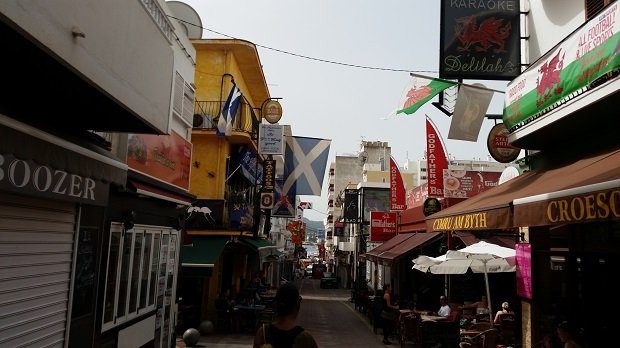 The West End by day perfect for great British pub grub and a recharge between activities.

It is noisy with people laughing and chatting and the bars pumping out music through the streets.  There has been a clampdown on noise and bars which play music should have their doors and windows closed when playing music but  whilst the reputable establishments abide by this ordinance,  several, however, continue to flout this law.  Recently the local council have taken steps to employ someone to monitor and uphold the ordinances of the area to ensure adherence to this ordinance to help combat the noise issue for local residents.

The luky luky guys are notorious, preying on those that have taken it to excess so being street wise is a must but again, that is the same anywhere where large volumes of drinks are bought and sold.  And again, a simply shake of the head and “No Thank You” sends them on their way.

Overall I personally do not believe that the West End is as bad as we have been led to believe and the reputation it has is mainly due to the worlds media scaremongering and looking for sensationalistic headlines its just sad that many believe this representation of the West End is San Antonio and Ibiza as a whole.

It is not a place to be scared of, but one to be embraced.  Yes it has become a bone of contention locally and I can completely understand why with the noise, mess and bad behaviour of some of the visitors, especially as they flow out into other areas of the town it can cause problems.

However, with the upholding of the rules currently in place and a little more security and policing to help prevent too much excess and the associated problems that excess brings and a further clampdown on the luky luky men I believe that this area can be a fantastic place for those that wish to go and relax, enjoy good food and great drinks at an affordable price as part of their trip to Ibiza.

From a middle aged point of view it was a fantastic place to while away the hours and meet some fascinating people.  Yes  occasionally it got a little edgy but with plenty of doorman / security on hand it never  got out of control and if you are like us and like to enjoy a few drinks with great conversations and banter then I would highly recommend trying the West End at least once.  If you don’t like it you can always move on elsewhere but you may be surprised at how endearing the West End is.