Does San Antonio Ibiza want to ban drinking water in the streets? 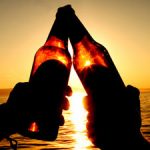 San An trying to ban drinking in the streets

Yesterday at the monthly meeting of the Council of San Antonio a proposal has been put forward to change the ordinance of Coexistence which would result in the banning of drinking in public, crowded places.

Not just alcohol, which is already banned but all drinks including juice, water, milkshakes, coffee in fact anything of liquid form in a container and if caught you could face a fine of 750 Euros.

The reason is to try and curb the amount of people drinking alcohol in the streets and public spaces which is causing disruption and annoyance within the town.

Town Councillor Aida Alcaraz explained “Given how difficult it is for police to differentiate between whether it is alcohol or a soft drink being consumed it is necessary to adopt an outright ban,”

She continued “Obviously people will be allowed to consume drinks on the terraces of bars but they won’t be able to take the drinks off the premises,”.

Now the Spanish media have gone to town on this as I have no doubt so will the British Press in the coming days with many saying it’s a blanket ban of drinking any liquid in all streets and also it is already law.

However both points are incorrect it’s not a blanket ban and due to the way Spanish politics work it is only currently a proposal with a 30 day consultation then it may become law, be dropped or modified.

“Faced with the controversy that has raised the amendment of the Ordinance Coexistence was initially approved in the regular full of April, the City of Sant Antoni wants to make some clarifications:

– The article that has caused controversy is Article 42 of the same ordinance, in particular points 4 and 5.

– Article 4: “consumption of alcoholic beverages in public places is not allowed when conducted outside authorized areas between 00.00 and 8.00 hours or, in general, when they can cause discomfort to people who use public spaces and the neighborhood, except authorizations can be granted in individual cases “

– Article 5: beverage consumption is not allowed, by one or several persons, when the morphology or nature of the public, consumption can be massively by groups of people or invite agglomeration, which could impair the tranquility of the environment or cause unsafe situations, or when consumption externalize so demeaning for vianantes or other users of public spaces.

– In no case shall be prohibited consumption of soft drinks in other different assumptions to those contained in Article 5. The consumption of water, juice and other soft drinks is not prohibited, except in situations known to all (bottles and agglomerations nightlife areas or other) that may cause unrest in neighboring or cause unhealthy situations (accumulation of dirt and residue)

– Yes it will be forbidden to leave the premises with alcoholic or non-alcoholic beverages (except terraces and authorized spaces) in any type of container (glass, tin or cardboard) with the same philosophy: avoid crowds on the street that may cause unrest.

– This ordinance responds to the need to regulate situations that have been repeated throughout the years and provides a new tool to the local police to avoid them.

– The ordinance was initially approved and now a claims procedure begins.

So despite other media reports we take this as you can drink water juice etc in the streets apart from those where crowds are known to gather IE the West End, Sunset Strip.

We will of course keep you updated on this as more information becomes available here on The White Isle blog.