Small but notable steps in Improving Ibiza for all 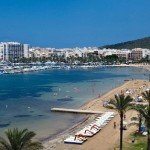 Improving Ibiza for all

As the election campaign gets into full swing in Ibiza it seems a few changes, for the better, are already taking place. Some cynics may see this as being done purely for vote grabbing and electioneering purposes but even so this can only be a good move for the island and for those who visit.

Yesterday a major police operation was carried out against those hawking along the beach and promenade in San Antonio leading to 19 arrests for various offences from illegal selling to immigration offences.

Most of us know them as the “luky luky” men selling hats, sunglasses, cds and even this year selfie sticks and who knows what else.  Although being of a certain age I doubt I would make a very good customer.

As much as we find them more of an all round irritant than a major problem,  it is great to see the authorities taking steps to clean up the town and make it even friendlier and welcoming for tourists.

The operation against them will be repeated throughout the summer months and it is hoped that this will help deter illegal street crime, beach vending and other associated activities which they are known for.

Another matter brought to everyone’s attention last week was the sale of inappropriate t shirts, beach towels and the like.

One of the parties standing in the upcoming election Reinicia Sant Antoni (Restart San Antonio) posted this picture on social media. 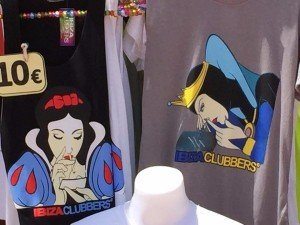 It sparked several news stories and many discussions about the image this portrays to those visiting San Antonio and Ibiza as a whole.

As much as the majority of those visiting are late teens and early 20s and would just laugh at it and even possibly buy it for a laugh, for me personally taking family holidays to the resorts of Ibiza it is a step too far.

Some will argue it’s just a bit of fun, but trust me when you have a daughter who is more than happy to question the world around her, you try explaining to her what it portrays and why her favourite character is doing it.

On a wider note it’s also not the image that any holiday resort should be portraying, and I am sure that if images like this appeared on the UK High Street with the local town name instead of Ibiza there would be outrage.

You have to remember that Ibiza has a living, working population with families and as much as many people wouldn’t dream of taking their children to Ibiza, many are born and brought up there. Why should they be exposed to such images at an impressionable age?

As much as it’s not clear what the authorities can actually do against this type of product, it is nice to see people highlighting this sort of issue and discussing the wider implications.

As I have always said it is going to be a long road ahead to improve Ibiza and notably San Antonio’s reputation but it shows that people do care and that the authorities are starting to take steps in the right direction.

The electioneering will continue over the next 10 days or so before two days of reflection (something other countries should adopt) before the masses of Ibiza go to the polls on the 24th May.

Whatever the outcome I am buoyed by the dialogue that I have seen so far and the ideas coming forward.

I believe the next 5 years will be a game changer for Ibiza making it the jewel in the crown of Spain’s tourist destinations.

tagged with Better for all, Ibiza, imporving, San Antonio