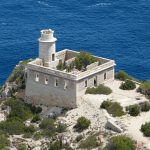 The white isle is full of fascinating and interesting places and the abandoned Punta Grossa Lighthouse Ibiza is no exception.

Located in the northeast of the island near Cala de San Vicente is the now abandoned lighthouse and from the outset, we will say this is not one place that is easily reachable and we would advise getting a local guide to take you.

The paths to the lighthouse are steep, very narrow and are along the cliff edge so enjoy the story of this once safety beacon for ships, boats and its rather ill conceived location but please please only visit with a local guide.

The lighthouse sits 55 meters above the sea on steep cliffs nestled on a small outcrop.  They started building it in 1847, however, due to its inaccessible location all building materials had to be brought to the site by sea and hauled up the very steep cliffs.

It was eventually completed in 1870 after taking such a long time due to it’s ill conceived location, poor building materials and an outbreak of cholera that reduced available workers considerably for quite some time.  In addition to this there was a lot of political arguing over its chosen location which seems to be the first hint of a little urban corruption on the island.

In 1870 it was finally completed and the light was turned on providing a fixed white light varied by eclipses every four minutes. This lighthouse had the slowest pace of the entire Balearic archipelago.

However, after only 46 years of life in 1916, the light was extinguished for the last time and became abandoned. 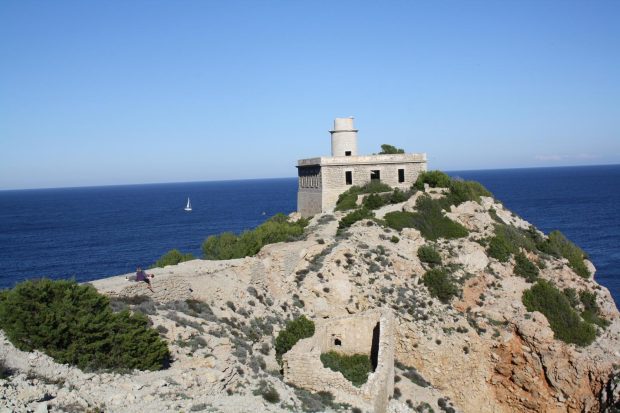 In the same year the recently built Tagomago lighthouse took over the lighthouse duties.  Tagomago it turns out it a much more efficient location for a lighthouse and is still to this day a landmark in the shipping routes from Ibiza to Palma de Mallorca and Barcelona.

Since its abandonment the lighthouse at Punta Grossa has just sat peacefully acting as a reminder to Ibiza history whilst the weather and fauna of the island takes the structure back to a shell of its former self which is what you can see today. 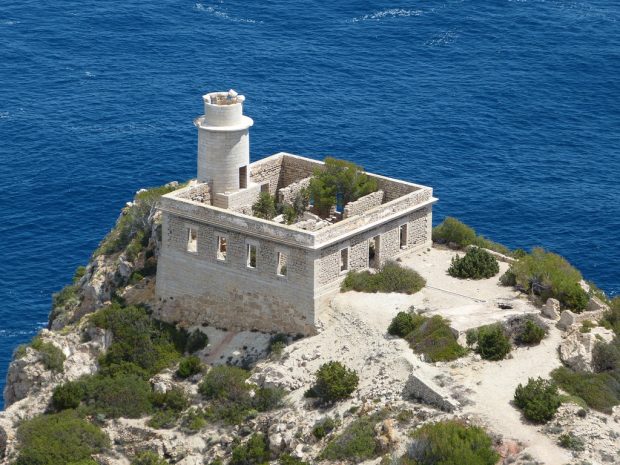 There is a fantastic video here courtesy of www.ibizaisla.es of what is left today.

We did hear of a rumour that it was used as a school building for a short time but we are a little sceptical as it is over 2km from the nearest dwelling,  and well that cliff path is definitely not one we would want our kids walking along.

However, if you by any chance get the opportunity to sail past or see it off in the distance, tip your hat to those who built and then manned this poorly placed lighthouse in Ibiza.